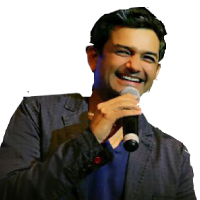 Mayur Puri is a professional storyteller, screenwriter, lyricist & filmmaker working in Mumbai film industry for more than 2 decades now. He has written over a 100 songs, and scripts of many movies including blockbusters like #OmShantiOm (2007) and ABCD (2014). He has written Hindi dialogues for several Disney, Marvel and Pixar movies including #TheJungle Book (2016), #Avengers:InfinityWar (2018),#Avengers:Endgame. (2019) and #The LionKing (2019). Mayur’s short film #Firdaws (2017) has been doing the festival rounds and as of now has been the official selection in 36 international festivals and has won 16 Awards.
In 2010, he co-founded #StoryCircus – an institution dedicated to foster the art of Storytelling, which now functions as a full fledged Theater Group.